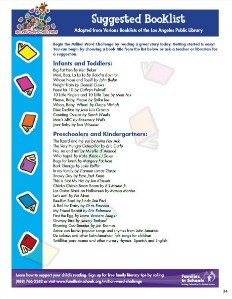 Begin the Million Word Challenge by reading a great story today. Getting started is easy!
You can begin by choosing a book title from the list below or ask a teacher or librarian for
a suggestion.

First Graders and Second Graders:
I Spy Fly Guy! by Tedd Arnold
Rap a Tap Tap: Here’s Bojangles – Think of That by Leo and Diane Dillon
Benny and Penny in the Big No-No! by Geoffrey Hayes

Seventh Grade and Up:
Hunger Games by Suzanne Collins
Drama High: The Meltdown by L. Divine
Abraham Lincoln and Frederick Douglass: The Story Behind an American Friendship by Russell Freedman